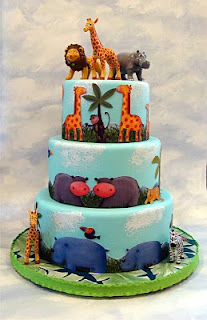 The July ICES meeting was the one year anniversary of the first public demonstration of the Cricut Expression cutting gum paste. I first presented this new technique to the Louisiana ICES in July 2009. Everyone was amazed and excited with the new cake decorating possibilities. We had just started selling the first Creative Designs DVD and at the time had no idea that this technique would soon go global.

In the October 2009 issue of the ICES magazine the first printed article was published about the Cricut. At the end of October the first demonstration of using the Cricut for cake decorating was presented to Provo Craft. The people attending were amazed at what I was able to do with sugar and a Cricut.

At this years July ICES meeting I was able to give a Cricut Cake machine to Ms Lillie. Tickets were passed out and she had the winning number. Congratulations Ms Lillie, I hope you enjoy your new toy!

OUT WITH THE OLD AND IN WITH THE NEW!!!

Considering all that I have been through with Provo Craft, I still tell people that the Cricut is a great machine. Any one of the Cricuts will do a great job cutting gum paste if you use my method. I use the Cricut Create in the classes I teach, but any electronic cutter with a mat and blade will work.

In the meantime, I had discovered how to use my printer to print on gum paste. I was able to print gum paste sheets just like I would a frosting sheet. Now I can cut out designs with printed images. I began watching youtube videos to learn more about the different electronic cutting machines and found a video about the print and cut feature of the Silhouette. This sparked my interest, so I got the Silhouette and began experimenting. It didn't take long to figure out how to cut out gum paste images with the Silhouette. This was great! I could scan any image, print it on gum paste and the Silhouette would cut it out.

I now had a new respect for the Silhouette. I also discovered that it did a great job cutting out my regular decorations. I was delighted to find that I had a machine that performed as well or even better then the Cricut and it was able to do something that the Cricut cannot do. I knew the print and cut feature would be something that cake decorators would love.

I worked with the Silhouette, found a cutting blade that worked great and decided to contact the Silhouette people to show them what I was doing with their machine. I was careful to not let what happened with Provo Craft happen again. I am protected legally because this method is patent pending. I met with the folks from Silhouette and they were interested in what I was doing. Silhouette is a great company and I hope we will be able to work together to come out with great new products that cake decorators really want and will use.

At the July ICES meeting we also had a drawing for a Silhouette. The winning ticket belonged to Ms Geneva. Congratulations! I hope you love using the Silhouette as much as I do.

In the mean time, I have a blade, an instructional DVD and can sell the machines. Jeff will be putting this on http://www.creativedesignscakes.com/ web site.

So, Out with the old Cricut and in with the new Silhouette!!
Posted by Linda at 8:11 AM 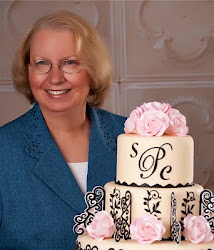